Equine Dentistry has gone through quite an evolution within the twenty years I’ve been working in the industry. When I entered the Equine Dental Certification Program there were only two theories, Veterinary Dentistry and Traditional Horse Dentistry (Equilibration or Three-Point-Balance). Recently there has been a new marketing approach to dentistry, identified as “Natural Dentistry”, (performed without sedation and exclusively using hand floats).

Because of the significant differences between these three dental theories, I am obliged to discuss the differences so horse owners will know what they are paying for and how each dental theory influences their horse.

REGULATIONS: Equine Dentistry is regulated differently world wide. The United States regulates the industry State by State, generally finding a resolution through the courts while some areas in the U.K. have found a solution through the recognition of Equine Dentistry’s modality; acknowledged qualified educational equine dental facilities, established an independent written and practical certification proficiency process (if the school does not offer it) and regulated the industry through the Veterinary Association.

Canada is one of the last hold outs so it has been host to a number of Equine Dental court battles in an effort to establish, value, viability, and credibility. Case 1- the conclusion of Pequin/Williams vs Alberta, provided the lay dentist with the right to work; Case 2- Bishop vs BC, set precedent allowing the BC Veterinary Association to block the lay dentist’s right to work along with all other modalities servicing the BC equine industry; Case 3- results of MacKinnon vs Alberta defined the differences between Veterinary Dentistry (two points of balance) and Equilibration, (three-point-balance or the Traditional Equine Dentistry) and horse owners retained their right to choose; and Case 4- recently, a popular horse dentist serving the Standardbred industry in Ontario and Quebec won the right to continue to practice in Yves Jean vs Quebec.

CHANGING TRADITION: Equilibration or Three-Point-Balance today is widely known as the Original or Traditional Equine Dentistry, practiced by horse dental specialists in the mid to late 1800’s when horses were a vital integrated part of daily life. A “float and balance” was considered the proper way to maintain horse’s health and teeth.

Now, decades later we are watching the growing pains of an industry’s rebirth. I can’t image carrying my instruments from farm to farm in a buggy or wagon hitched to a stud horse. But that’s what the early equine specialist did; he would service the mares, trim the feet and balance the mouth before he moved on to the next farm. We have a couple vintage photographs of the early dentists. One of Wild Bill Cody watching his young horse’s teeth worked on, we also have a picture from WWII balancing a horse’s mouth without a halter or shank. You can find both pictures near the bottom of the Gallery.  https://mackinnonequineservices.com/gallery/

During my tenure, we have witnessed a wide variety of approaches to balancing a mouth as spinoffs from the traditional education.  Most of these differing attempts to make it easier to find balance, fall into the category of an improper dental address or a dishonest explanation why they couldn’t finish the job.  In all of these cases, the horse was left in worse shape than when they started. Most developed performance difficulties directly related to the dental procedure. Others suffered with moderate to severe angle changes and protuberances left unattended, which removed their ability to masticate their feed properly. In all cases, the horse owners were left to search and pay for someone to “fix it”.

The spin on this familiar farrier quote applies nicely, “If you think a good horse dentist is expensive, try hiring a bad one.”

MODIFICATION of TRADITIONAL TRAINING: The equine dental industry is continuing to grow and doesn’t look like it will be slowing down. There have been efforts by some in the industry to “keep the corner on the market” or “maintain control of the market”, has pressured schools to modify traditional and ethical practices to meet illogical demands so their graduates can set up shop and return often for regular updates. As a result of these traditional training deviations, improper modifications to the teeth are increasing and have devastating affects to the horse.  Such as: instruments not being used properly; instruments being used that are unable to address all teeth properly; table angles being altered improperly; good healthy adult teeth being pulled due to a mere protuberance; fracturing teeth by the improper use of equipment; severe protuberances being ignored…all a result of improper education and a lack of personal integrity with an inappropriate economic influence.

Recently we learned of an Equine Dentistry School making an effort to teach individuals how to perform dentistry on un-sedated horses in the name of “Natural Equine Dentistry” giving horse owners a false confidence that balance has been achieved. It is logistically impossible to properly address a large portion of an unsedated mouth. The student may be able to remove some of the sharp points but understanding the enormous strength of a horse’s tongue and cheek muscles, along with the movement of the jaw, make it easy to realize why it is impossible to achieve a full mouth balance.

Dr Tomas Teskey also believes, “It’s quite an abnormal sensation for a horse to have their front teeth filed, whereas their chewing teeth seem to be quite simple to file. Forcing them to “deal with” the incisor work without drugs has generally resulted in head shyness and resentment, and is dangerous for everyone, so now I am pretty careful to create the best situation possible.” Excerpt from interview, The Feet/Teeth Connection, April 7, 2017

VETERINARY DENTISTRY: My ability to speak to Veterinary Dentistry comes by way of the many open discussions with veterinarians about the limited education they receive on the subject, personal observation and working on thousands of mouths that had just been to their veterinary dentist.

The one question we are asked more than any other is why does the Veterinary industry ignore balance in the horse’s mouth. Background: the industrial revolution forced equine dental specialists of the early 1900’s into retirement and most of the horses were turned out and forgotten when replaced by the automobile and tractor; oil changes became common place instead of routine equine dental visits. At the time many thanked God for the invention of the automobile, “we can finally be rid of all this pollution” (manure).

After a good many years, pleasure riding developed popularity, but the normal chewing pattern of a horse still created sharp points on the edge of their molars, due to the unique shape of their teeth. When a halter or bridle was introduced, inadvertently the cheeks, tongue and pouchy flesh of a horse’s mouth push into these sharp points.

The horse would indicate they were in pain by tossing his head; pushing away with their head; pulling back; nosing out through the bit; and becoming difficult to catch, bridle or halter. Unfortunately, a quick scrub on the sides of these “cheek teeth” became what we know today as a “float” with a hoof rasp. Floating teeth is what they still teach today in veterinary schools. Continued training is available but still eliminates the importance of addressing the complete mouth. Abnormalities, protuberances and incisors are largely ignored in most of the veterinary dental programs in North America.

EQUINE DENTAL EQUILIBRATION IS REAL and there is no such thing as “natural dentistry”.

This is one case that proves my point. I challenge any “natural” dentist to post before and after pictures of difficult cases. I also challenge anyone who argues that equine dental equilibration is not real to look at some of the cases posted on our page and explain their rational.

If you hear that it is not necessary to work on incisors (front teeth), this is not true. Many incisor pathologies can be corrected with proper training. Equine dentistry is a science AND an art. A few hours of dental training in vet school are not enough to accomplish results like the case shown here. It takes special training and instrumentation to correct many of the dental problems we see.

The first step toward changing some of the disturbing trends in equine dentistry is to create awareness of what is real and what is not. Pictures do not lie. They speak for themselves.

Share this with your horse friends if you want to help put an end to the needless dental pain that horses endure daily.

These pictures were taken 15 months apart. Even the bones have realigned themselves following multiple dental procedures. 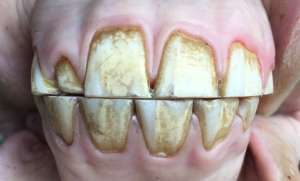 However, there have been many attempts by veterinarians that have also attended advanced equine dental schools to incorporate full-mouth-balance and corrective adjustments into the veterinary curriculum.

TRADITIONAL DENTISTRY: Equilibration or three-point-balance today is the same as what was known by horse dental specialists in the late 1800-early 1900’s  The demand for professionalism and proficiency in the dental field has encouraged the re-emergence of the equine dental trade. It is through this demand of horseman world wide that a clear understanding of horse dentistry as a full-mouth balance has landed at the top. This is what MacKinnon Equine Services provides to all their clients.

Every horse deserves a full-mouth-balance annually, at the very least.  We routinely explain to the conscientious horse owner how similar tooth growth is to hoof growth. Both are highly vascular and have independent pumps that provide a healthy blood supply when balanced properly.  If imbalances or overgrowths are not addressed, they will soon find themselves chasing a problem.

It was recently said, that “hooves and teeth should never be out of balance”.  Words to live by!

As the equine dental industry continues to morph into a consistent, regulated industry that provides continuity to the horse and owner, it is important to stay educated and informed. Know what you are paying for when you hire an equine dental specialist.

Dr Jewell, DVM, CAC believes dental and spinal care are two very powerful and essential cornerstones of equine health and longevity. “Although the focus of my practice is the spine, I cannot emphasize enough how important equine dentistry is in the big picture of optimal equine health. There is a continual myofascial connection from the horse’s jaw to the musculature of the pelvis. Simply put, an imbalance in the oral cavity of your horse, directly affects his neuromuscular health and therefore his movement and ability to live free of discomfort and yes, pain”.